Italy’s retailers have denounced the growth of Mafia extortion rackets which they say now affect big companies as well as smaller ones. 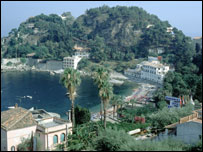 The Mafia has turned into one of Italy’s biggest business enterprises with a turnover of more than $120bn (£60bn) a year, a new report says.

The report, prepared by Italy’s leading retailer’s association, warns of growing Mafia influence in the south.

It estimates that 7% of Italy’s output is filtered off by organised crime.

The retailer’s association says it is seriously concerned by the spread of Mafia extortion rackets from small to big businesses.

Some of Italy’s best known and largest construction companies are denounced by name in the report for allegedly turning a blind eye to organised crime.

Organised crime is present in all areas of the economy, from food manufacture to tourism, from real estate to finance and in the service industries, the report says.

Big business also finds it easier to negotiate agreements with the Mafia rather than to denounce extortion rackets to the police, it adds.

The study alleges that 20% of Italian shops pay regular hush money to criminals to carry on business undisturbed.

The proportion is much higher in southern Italy. In Sicily, eight out of 10 shops pay a regular monthly sum to the Mafia, the report says.

Deputy Minister of the Interior Marco Minniti said the growth of Mafia business crime was alarming.